In 1846 four Benedictine monks led by Dom Rosendo Salvado and Dom Joseph Serra travelled through the Australian bush to set up a mission and found the monastery at New Norcia by the banks of the Moore River.  Like the pioneers of their time the monks were men of great determination and vision, enduring extreme hardship as they set about planting crops, building huts and making contact with the local aboriginals who settled near the monastery.  Dom Salvado’s most cherished ideal was the greater care of the aboriginal population and the monks supplied their food, ministered to their illnesses and injuries and undertook the education of the aboriginal children.

Records suggest that homoeopathy was the main form of medicine used by the community at this time.  Dom Rosendo Salvado, who arrived in Fremantle in January 1846, was the first person to introduce Homoeopathy to Western Australia.

Originating from Spain, Dom Salvado became interested in Homoeopathy because of the acclaim Dr Samuel Hahnemann was receiving in Europe with his highly successful treatment of Typhus with homoeopathic doses of Rhus Tox, Hyoscyamus and Bryonia during the battle of Leipzig 1813. 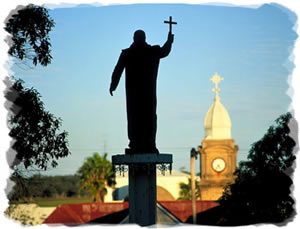 Dom Salvado brought with him an extensive chest of homoeopathic remedies with which he ministered to the monks, local people and aboriginal community.  Salvado was known to have corresponded with Florence Nightingale on the subject of contagious diseases and kept detailed journals, some of which described physical symptoms, bodily functions and the like.

Letters in the New Norcia archives record orders through a London shipping agent for homoeopathic books and replacement remedy supplies to be purchased for the monastery from Gould’s Pharmacy of London.  A letter dated 19th November 1880 confirms that the order for a Book of Chemistry and a chest of Homoeopathic Medicines was to sail for Australia on “the Daylight” leaving about 15th December.  The letter also mentions the very good price they were able to secure for the sale of the last shipment of New Norcia wool and advice from Marseilles on the Care of Church Ornaments as requested.

In the New Norcia Museum there is an impressive display of Dom Salvado’s original collection of remedies, books and homoeopathic tools of the trade.

There are several small wooden storage chests containing a range of remedies as comprehensive as a modern day Homoeopath would stock in their dispensary.  For the most part these remedies are 6c and 30c potencies and reflect the use of Homoeopathy in Europe and England at the time.  These potencies are commonly used in home remedy kits today while higher potencies (200c, M, 10M) should only be prescribed by experienced homoeopaths.  The use of higher potencies was popularised in America by James Kent in the late 1800’s.

Interspersed with homoeopathics are many herbal remedies, tinctures and tonics that were probably used by subsequent monks and members of the community.  Also on display in the museum is an array of artefacts tracing the history of the New Norcia aboriginal mission to the present as a spiritual, cultural and educational centre.  The art collection is one of the finest collections of religious art to be found in Australia.

The monastery library and archives house thousands of books, rare imprints and manuscripts.  Among the collection of homoeopathic books, a shifting emphasis from the philosophical texts (Hahnemann 1845) to the more practical (Ruddock 1879) is observed.

Initially Salvado would have required the academic texts for their philosophical background.  As he used his remedies in the treatment of the local aboriginals and community his references would probably have been applied more to the practical, therapeutic texts – this is reflected by the publication dates of his book collection.  In recent years Salvado’s copy of the Organon was identified amongst the personal belongings found in his cell at the monastery.  Organon is a original statement of the basic paradigm and principles of Homoeopathic medicine, developed by Samuel Hahnemann through a series of six editions from 1810 to 1842.

Currently the home of 16 Benedictine monks, New Norcia is 132 km north of Perth along the Great Northern Highway and welcomes visitors to enjoy its historic beauty. 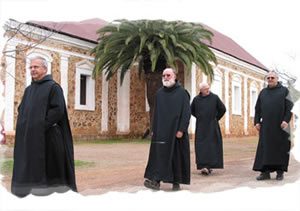 History of Homoeopathy in Australia